Posted on April 4, 2014 by siuslawgenealogy

The Siuslaw Pioneer was a publication of the Siuslaw Historical Society. The following story (written by Mrs. Nellie (H.M.) Petersen) appeared in the 1949 issue.

When Cream Separators Came to the Siuslaw

adds a separator to his diary plant. That must have seemed to his neighbors a reckless thing to do for at that time they were just beginning to be heard of in the Siuslaw.

Opinion was freely expressed that this was only a fad, and those foolish enough to put their money into such a contraption would soon find they had wasted their money on something that would not work.

Those were the days of wide shallow tin pans and stone crocks into which the milk was strained then left to stand in a clean cool room until the cream had risen to the top, when it was skimmed off with a large spoon, or skimmer of tin full of small holes for the milk to drain away from the cream.

It was then slid off into a container and kept until there was enough for a churning. The cream was poured into a churn of the dasher type and someone, usually the children, stayed at the task of lifting the dasher which became more difficult to move as the 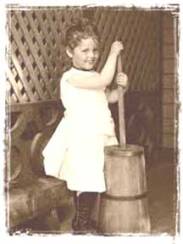 Not long after the McCornack separator had proved its worth Amos Haring purchased one for his dairy, and to quote Grandma Haring as she told it, ” We didn’t see how we had ever got along without it.”

Others, seeing how much work was saved, and more important how much more cream they saved, bought separators until every dairy man in the Siuslaw owned one.”

Note:  Copies of this and other Siuslaw Pioneer publications can be found in the Siuslaw Genealogy Room at the Siuslaw Library.