Staging Between Mapleton and Eugene

Posted on January 24, 2014 by siuslawgenealogy

The following story appeared in the 1951 issue of The Siuslaw Pioneer, a publication of the Siuslaw Historical Society.  It was contributed by Earl L. McNutt, a stagecoach driver for the Mapleton to Eugene run. 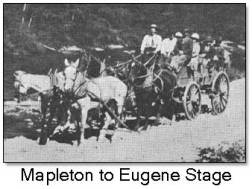 “The stage service fell pretty much into a double pattern–one for winter, the other for summer. For the very good reason that in the summertime the trip was made in around fourteen hours, while in the winter time it required from eighteen to twenty-four hours continuous performance.

The starting schedule in all cases was leaving each end of the route–meaning Mapleton and Eugene—simultaneously at 6:00 AM. In the summer a driver leaving Eugene drove as far as Elk Prairie (the Hale farm) in the morning and returned in the evening. Two other drivers had the route between Hale and Mapleton. In the winter there was usually a driver added between Elmira and Hale, also another driver added between Hale and Mapleton for the very good reason that he would be anywhere from midnight until 6:00 AM arriving in Mapleton, consequently he could not start back in the morning. A fresh team and driver were there to make that start.

The winter operation was mostly with two-horse vehicles, because the loads were light and traffic had to bear the lion’s share of the expense. Four-horse vehicles, used in the summer, could take care of much more traffic and freight.

You will bear in mind that before the railroad came most of your so-called express arrived by stage, particularly sewing machines. (and any other items that were billed by ship were charged according to the ship’s displacement.) The stage also carried the mail. The roads, if improved at all, were surfaced with split corduroy, which very much resembled eight-foot cord wood.

Difficulties that were not unusual occurrences on this road were breaking tongues, vehicle or horse bogging down, chopping trees out of the road following windstorms; and if too much timber was in the road, leaving the vehicle and proceeding with the mail on horseback. You will bear in mind that these vehicles had no tops and we sat in the rain.

For the aforesaid service drivers were usually paid from thirty-five to fifty dollars per month, depending on how good salesmen they were.

Evolution and the railroad ran staging via horse out of business.”

Note:  Copies of The Siuslaw Pioneer publication can be found in the Siuslaw Genealogy Room at the Siuslaw Library.

3 Responses to Staging Between Mapleton and Eugene