Posted on December 15, 2013 by siuslawgenealogy

THEREBY HANGS A TALE
George Riley Mills was a member of an early pioneer family in the Florence area. Born in Iowa in 1871, his family ventured west when he was 11 years old. They settled first near Roseburg, OR and later resided in the Siuslaw Valley. George married Clara Evelyn Carns in 1899 in Florence. Shortly after their marriage, George built a hotel in the settlement of Acme [now known as Cushman, 2 miles E. of Florence].

“When Riley Mills and wife were ready to move to Acme he went on ahead and worked in the Saubert mill. She came later on the tug Robarts, and in her finest clothes to meet her husband.

Most of Acme at that time was one big marsh and had long walks back to the houses.  The houses were built up on stilts to be out of the water at high tide. The main boarding house where Mr. Mills stayed was way back next to the hill.

Mrs. Mills says, ‘Mr. Mills met me at the boat and took me in tow for the boarding house. We went along the walk until we came to a house built up pretty high, but not high enough to stand up and walk under in a[n] upright position. The walk continued under house.  Mr. Mills ducked down and began crawling under the building.’

I stood watching and thinking he had gone out of his mind, because he hadn’t said anything to me about such a place.  Finally he looked back and said, ‘come on and crawl under.’  I thought he was joking but he insisted so I followed.

Just as a I came out on the far side Mrs. Gates, who ran the boarding ho 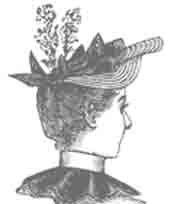 use came out with a big kettle in her hands and as I looked up she drained all the potato water in the kettle all over me.  It went all over my best hat, plush cape and the bottom of my skirt.

Such a mess!  She apologized and we rushed into the house and tried to get the stuff off my clothes.  But my best hat and the plush cape were never the same again.”

Postscript:  Mr. Riley ran the hotel for 10 years before selling it and began piloting a tow boat on the Siuslaw in addition to other occupations. George and Clara remained in Cushman the rest of their lives.  Clara died in 1944 and George died the following year.  Both are buried in the Pacific Sunset Cemetery in Florence.

This story was submitted to the blog by Siuslaw Genealogy Society member, Louise Carlson.